‘The atmosphere is electrifying’: How Braver Angels debates are lighting up college campuses 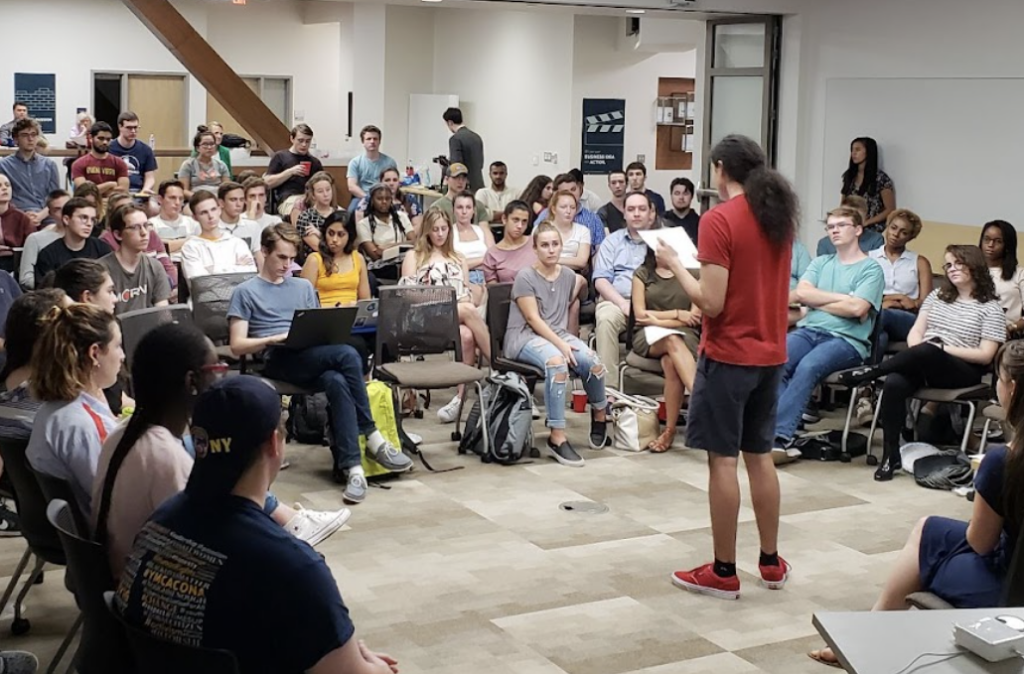 Imagine you’re a college student and a controversial issue comes up during class. In my experience, it can often go one of two ways: either everyone agrees – making the discussion uneventful if not boring – or somebody disagrees, and the conversation quickly escalates and then gets immediately derailed or shut down. In either case, students aren’t given the chance to sit in discomfort long enough to explore the most interesting dimensions of the issue.

At their best, college campuses are uniquely positioned to nurture discovery and growth. But for the past decade, people from across the political spectrum have been concerned about how polarization has stifled civil discourse at these institutions. According to one report, 24% of liberal students and 68% of conservative students engage in self-censorship – at least in part because they’re concerned that “other students in the class would have a lower opinion of them as a direct result of sharing their political perspectives.”

Instead of winning the argument or convincing the other side, these debates are focused on creating more understanding through deep listening, critical thinking,

In 2018, April Lawson, Director of Debates at Braver Angels, and Doug Sprei, VP of Multimedia and Campus Partnerships at the American Council of Trustees and Alumni (ACTA), recognized the need to foster more honest and productive dialogue on college campuses. In partnership with the student group BridgeUSA, they developed a College Debates and Discourse Program for college students nationwide. Instead of “winning” the argument or convincing the other side, these debates are focused on creating understanding through “deep listening, critical thinking, and thoughtful communication.”

Early on, after a successful debate at American University, Doug said they realized they had captured “lightning in a bottle.” “The heightened attention, alertness, listening, and empathy that’s in the room – you can feel it,” Doug said. “The atmosphere is electrifying.” Since it’s started, they’ve launched nearly 90 campus and classroom debates and have engaged around 4,000 students across the country. And the demand is high. “The phone is ringing; we’re not doing much cold calling,” Doug said. “A lot of schools are finding out about this and asking us to come to their campuses – and it’s growing all the time.”

Since the College Debates and Discourse Program started, they’ve produced nearly 90 campus and classroom debates and have engaged around 4,000 students across the country.

What makes this program so effective? First, the partnership between Braver Angels, ACTA, and BridgeUSA has worked well, with each organization contributing something different and complementary. Braver Angels brings the debate methodology that allows students to engage with empathy, ACTA provides connections to college leadership as well as project management and media expertise, and BridgeUSA has student-led chapters across college campuses. “This partnership is a very natural one,” Doug said. “It’s kind of intuitive.”

In turn, the partners collaborate with students and faculty members on campus to “give them as much ownership of what they’d like their Braver Angels debate to be as possible,” Doug said. Specifically, they have students choose the resolution. Some schools tackle a pressing international debate, such as “Should the U.S. send troops to protect democracies in peril,” while other schools opt for a local issue, like, “Should Greek life be eliminated from our campus?”

Giving students ownership of the topic makes every debate unique. “It’s very much customized toward the individual campus, the vision that the students and faculty have, and the climate that is there on campus,” Doug said. Students will often choose an especially-heated issue for their campus. And once these passions are inflamed, they can be “transmuted into something powerful if people dare to speak, listen, and create an atmosphere of respect,” Doug said.

Once these passions are inflamed, they can be “transmuted

into something powerful if people dare to speak,

listen and create an atmosphere of respect.”

Another key component of their success is the format – a light parliamentary-style debate chaired by a trained expert – which April designed based on her years participating in debate through high school and college. With this format, the students never directly respond to each other with a question like, “Why did you say that?” Instead, they direct their responses to the chair, saying, “Madam Chair, I am curious why the previous speaker said that.”

This structure provides an important guardrail that steers the conversation. It generates enough energy for the participants and audience to learn without being overwhelmed by conflict or chaos. “You don’t have an opportunity to do your typical tit-for-tat dialogue with someone,” Doug said. “You’re speaking to many minds all at once and they’re all listening to you.” And when students have the floor, they’re incentivized to “think critically about what they’re saying.”

Doug gave the example of a participant at UC Berkeley’s debate on the future of People’s Park – an individual who had been previously arrested by the campus police for violent protesting. Despite the reservations of university officials, he was given the opportunity to be an opening speaker at the debate. “He spoke persuasively, eloquently, and powerfully, and everyone listened,” Doug said. “He was able to channel his energy and emotion into productively sharing his point of view. We’ve seen that happen again and again in debates.”

There’s also room for “aha” moments. When members of the local Native American community came to Arizona State University to participate in a debate about building a wall at our southern border, they shared their perspectives on how the sacred lands, which are intertwined with their history and culture, would be affected. “The room became really quiet,” Doug said. “That’s a moment where people’s thinking widens. You discover there’s so much more to a topic than you expected when you walked in the room.”

“You discover there’s so much more to a topic than you expected when you walked in the room.”

Over the past four years – a period marked by escalating tension over election integrity, racial justice, abortion rights, COVID restrictions, gun laws, and more – these debates have served an important purpose for students. “College campuses are wonderful environments in which to inject a whole new intervention like this,” Doug said. “It gives students an experience of discourse and free exchanges of ideas that social media or regular conversation don’t often permit because there’s so much toxicity and rancor.”

And it doesn’t just excite the students. “Professors are constantly delighted by seeing their students manifest in this way,” Doug said. “The debate seems to bring out the best in everyone’s humanity.” He said it allows students to realize that just because they disagree with someone, doesn’t mean they’re fundamentally an adversary. And at a time when these conversations are often shut down or derailed, these debates give participants the ability to learn more deeply about other perspectives and gain respect for each other in the process. “As students explore not just the left and the right, but the nuances and contours of a topic, their critical thinking is ignited.”

“The thing that made my heart dance

Between the partnership with ACTA and BridgeUSA, the parliamentary-style format, and the success on campus, these debates have grown into a program with funding, staff, and focused leadership. “It’s become much more than April and I imagined it would be four years ago,” Doug said. “And it happened organically. When you recognize something that is ‘meant to be’ and sort of germinates by itself, you want to nourish that and let it stand up on its own.”

Much like how the conception of Braver Angels was a natural response to what American people needed and yearned for, this debate program is “driven by the demand that’s surging in the higher ed space.” “It seems to come from that same personal hunger that I felt myself when I first found out about Braver Angels,” Doug said. “The thing that made my heart dance apparently makes a lot of hearts dance.”

To sign up for or learn more about the College Debates and Discourse Program, go to this link. To suggest more stories I could report from the Braver Angels community, send me a note at gtimmis@braverangels.org. 2 thoughts on “‘The atmosphere is electrifying’: How Braver Angels debates are lighting up college campuses”